"A bond forged by fire can't be broken"

On April 19, 1895, flames swept down both sides of Muskogee Avenue from Shawnee Street to Delaware Street destroying three residences, fourteen businesses and one stable which was the source of the fire. This devastating fire became known as the "Great Fire of Tahlequah."

On April 26, the City Council passed as ordinance that no more wooden buildings could be erected in the business district. To fight these fires, 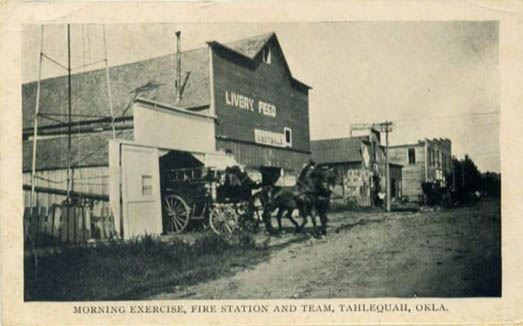 the town established the Waddie Hudson Fire Company No. 1, a volunteer fire department, and acquired a water wagon with a pump.

On June 5, 1905, the City Council was asked to recognize the needs of the department. The council answered with the procurement of a new wagon and equipment from the New York Bettering and Packing Company at a cost of $1,362.35, and a team of horses to pull the equipment was bought for $350.

On September 12, 1906, the City Council published an ordinance: "The Waddie Hudson Fire Company No. 1, a volunteer company, and the User and Custodian of the city's fire equipment, is hereby declared a part of the administration of the incorporated town of Tahlequah." The staff began with twenty-one firemen.

Also in 1906, the Tahlequah Fire Department became a member of the Oklahoma State Firefighters Association.

The Waddie Hudson Fire Company No. 1 continued until 1912 when the City Council called for a special election for bonds in the amount of $3,500 to be used to purchase a city fire station which would be operated by the City of Tahlequah. Thus began the fire department, which Tahlequah has maintained since that time.

In 1918, the renamed Tahlequah Fire Department received its first mechanized equipment. The "pumper" was a used 1916 Kissel truck purchased from Anderson Fire Equipment. Geo. F. McNett was the first driver and in 1926, Sid Bean, 1938 Past President of the OSFA, was also a driver. In October 1930, the Tahlequah Fire Department received a new 1931 Chevrolet with a 350 gpm pump and a 70 gallon water tank.

For more than 100 years, it has been an honor for the fire department to be a part of the OSFA. Over the years, the Tahlequah Fire Department has been a growing and changing service and the OSFA has helped to shape that service. The department has had three past presidents: Sid Bean-1938, Steve Smith-1982, Robert Adrian-1992, and Ray Hammons-2010.

The Tahlequah Fire Department continues to grow with the times. In 1976, the City Council was again asked to expand the department. This time the council met these needs with a new station which is the current Station 1 located on Chickasaw Street and again in 2011, 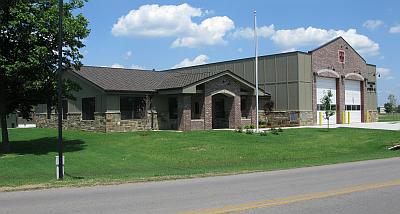 with the construction of Station 2 in the Southridge addition. Services have also expanded to include public education, a smoke detector program and many types of rescue services.

Today, the Tahlequah Fire Department welcomes what the future holds for its department, the OSFA and fire service itself. A bond forged by fire can't be broken.